How could we not post a blog this time of year without thinking about and looking forward to spring?  So in that frame of mind, here are some books that have the word SPRING in their titles.

Heart Spring Mountain by Robin MacArthur.  A young woman returns to her rural Vermont hometown in the wake of a heavy storm to search for her missing mother and unravel a powerful family secret.

Paris Spring by James Naughtie.  Paris, in April of 1968. The cafes are alive with talk of revolution, but for Scottish-American Will Flemyng–a spy working in the British Embassy–the crisis is personal. A few words from a stranger on the Metro change his life. His family is threatened with ruin and he now faces the spy’s oldest fear: exposure. Freddy Craven is the hero and mentor Flemyng would trust with his life, but when he is tempted into a dark, Cold War labyrinth, he chooses the dangerous path and plays his game alone. And when glamorous, globe-trotting journalist Grace Quincy, in pursuit of a big story, is found dead in the Pe-Lachaise cemetery, the question is raised–what side was she on? Certainly she knew too much, and had become dangerous. But to whom?

Spring fever by Mary Kay Andrews.  Annajane Hudgens truly believes she is over her ex-husband, Mason Bayless. So she has no problem attending his wedding. But when fate intervenes and the wedding is called off, Annajane begins to wonder if she’s been given a second chance.

Silent Spring by Rachel Carson.  This was first published in three serialized excerpts in the New Yorker in June of 1962. The book appeared in September of that year and the outcry that followed its publication forced the banning of DDT and spurred revolutionary changes in the laws affecting our air, land, and water. Carson’s passionate concern for the future of our planet reverberated powerfully throughout the world, and her eloquent book was instrumental in launching the environmental movement. It is without question one of the landmark books of the twentieth century.

Come Spring by Ben Ames Williams.  A fictional history of Union, Maine, here is a detailed novel of life in a Maine frontier village at the time of the revolution. Although they are not far from the scene of the war, the Indians and their own daily lives are of more importance to these sturdy pioneers than were wars or rumors of wars.

In the fire of spring by Thomas Tryon.  Not really about spring (but it does have spring in the title), this novel tells the story of women abolitionists in Connecticut.

Beyond the spring : Cordelia Stanwood of Birdsacre by Chandler S. Richmond.  Again, not really spring, but Stanwood was an ornithologist from Maine and known for her photographs.

There now, don’t you feel better already having just thought about Spring?

No matter what you have planned (or what may already be planned for you)  you can always take an armchair vacation in the Archives!

Here are some pleasure-seeking snaps from our collection, because wanting to savor every ounce of summer is not just a modern thing here in Maine…. Whether boating or swimming…

Among close friends or with a crowd… At a lake or on the ocean… With your special someone or the whole family… Playing hard or taking it easy… Catching up on reading or staying ahead of the traffic… Taking a tour or guiding yourself… Visiting landmarks or discovering your own… Creating whimsy or seeking it out… Eating well or feeding your mind… For an afternoon or overnight… Planning ahead or taking it as it comes… Enjoy every bit of summer!

Looking back at my previous blogs, I saw that on July 25, 2015 I had posted one about Marjorie Standish and particularly her Macaroni Salad Recipe.  I recently made a variation called Amish Macaroni Salad that was equally wonderful but different from hers.  It came from www.allrecipes.com; try it out this summer.

“A colorful and flavorful macaroni salad made with hard cooked eggs, bell pepper and celery in a creamy dressing. Best macaroni salad I have ever had. I always get many requests for recipe. Enjoy!”

1.        “L.C. Bates Museum is situated on the campus of the Hinckley School just off Route 201 south of the intersection with Route 23.  The museum was founded by L.C. Bates, a successful entrepreneur from West Paris, Maine, who financed the conversion of the industrial arts building to a museum in 1924.  Thanks to benign neglect, the museum was preserved in a wonderfully archaic state.  The place boasts a copious collection of minerals, baskets by the Penobscot Indians, cases featuring stuffed bear, caribou, and the peculiar calico deer  (among other items).  On the school grounds near the museum are several walking trails, which pass quite a few handsome stone edifices and memorials.  The trails are open to the public during museum hours; ask for a trail brochure at the front desk.”
http://www.gwh.org/lcbates/LCBatesMuseum.aspx
2.        “Worth visiting when you’re on campus is the Colby College Museum of Art.  The museum, housed in an open, modern wing appended to a more traditional brink structure, contains works by such Maine luminaries as Winslow Homer, John Marin, and Andrew Wyeth.  The museum is particularly known for its collection of paintings by contemporary artist Alex Katz.”
http://www.colby.edu/museum/
3.        “Learn more about the expedition at the Arnold Historical Society Museum, downstream from Gardiner on the river’s east bank in Pittston.  This fine historical home dates to 1765 and is furnished with period antiques.  The Colburn family lived in the house for nearly 200 years.  Visitors get a quick education in the history of decorative arts and architecture in seeing how the house evolved over the years.  The guide will also tell you about Major Reuben Colburn, the original resident, who hosted General Arnold and Aaron Burr for two nights while the final arrangement for the expedition were ironed out.”
http://www.arnoldsmarch.com
4.       “Another intriguing historic setting may be found in southern Oxford County, not far from Route 25.  Paris Hill is notable both for its assortment of handsome Federal-style homes and as the birthplace of Hannibal Hamlin, a Maine political icon and vice president under Abraham Lincoln during this first term.  This ridgetop setting with view toward the White Mountains serves as a fine back drop for an uncommonly well-preserved village of 19th century houses. “

“The Hamlin Memorial Library in Paris Hill is located adjacent to Hannibal Hamlin’s grand estate on the village green and is the only building open to the public.  This stout granite building served as a local jail between 1822 and 1896.  In 1901, it was purchased by one of Hamlin’s descendants and converted into a library and museum, which it remains to this day.”

5.        “In nearby South Paris is the McLaughlin Garden and Horticultural Center, a popular stop for anyone interested in landscaping and plants.  The gardens were started in 1936 by Bernard McLaughlin, an amateur gardener who worked in a local grocery store.  After his death, the home and gardens were acquired by a nonprofit foundation, which now maintains the grounds and is trying to restore them to their former grandeur.”

Backyard Grilling: Last weekend, I joyfully cooked hamburgers and hotdogs outside on the grill with friends and family. Of course, the ground was covered with snow, but the food and camaraderie were fantastic.

2.    No Jackets: On Wednesday of this week, we had a delightful taste of Spring weather. I rebelled in the morning by not wearing a jacket as I headed to work, and on the way home I had the windows rolled down in the car as I enjoyed 53 degrees. Okay, so it was only one day, but it was simply gorgeous.
3.    Walking: People are beginning to take leisurely strolls to enjoy the sunshine. At work, people are taking walks outside on their lunch-break instead of eating, just so they can soak up the warm sunshine.
4.    Productivity Increase: After yawning all week due to the time change, I am finally feeling great and full of energy, ready to tackle my To Do list in full force and with a smile!
5.    Birds: While washing dishes, I looked out my kitchen window and was pleasantly surprised to see a little Robin Redbreast happily fluttering in the tree. A sure sign!
So winter can have one last hurrah this weekend, and I will enjoy snowshoeing one last time. Then I shall declare winter OVER. I know Spring is coming, because yesterday, on the way home from work, I saw MOVING WATER in an otherwise frozen lake. So bring on the thaw! Bring on mud season! Soon I will be having lunch outside at my favorite spot, the Gardiner Waterfront, doing my favorite thing, reading a book (checked out of course from the Gardiner Public Library).
C heerful 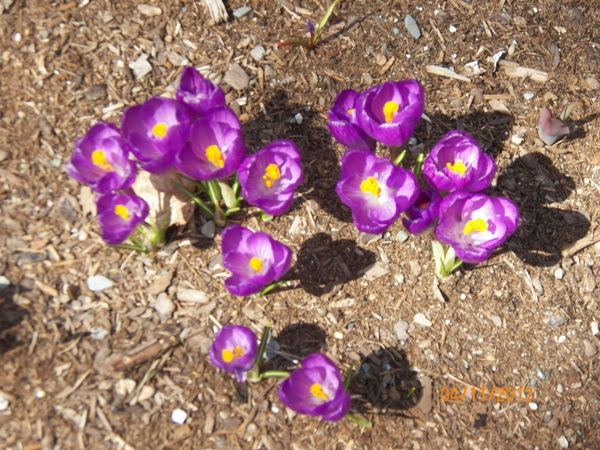 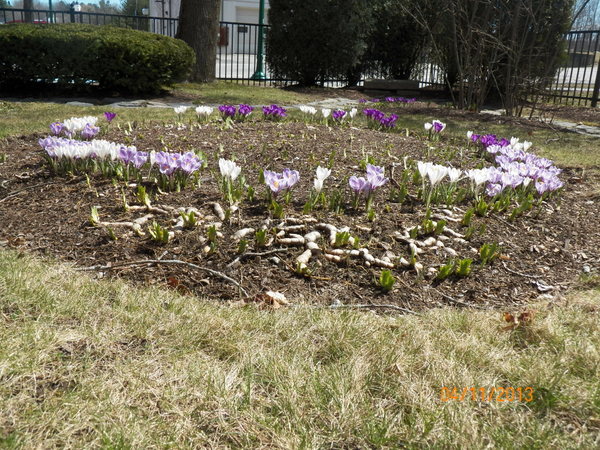 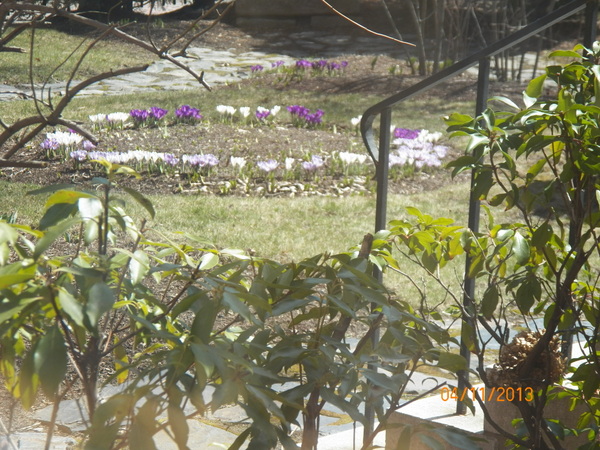 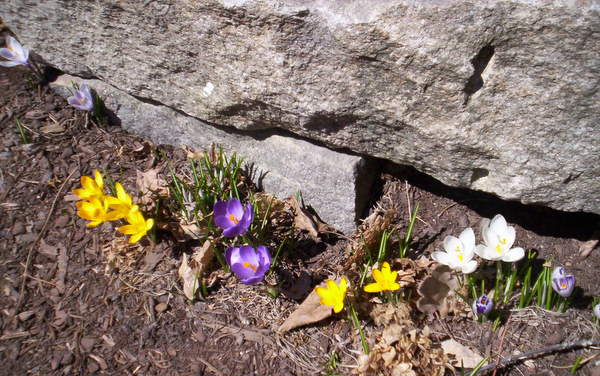 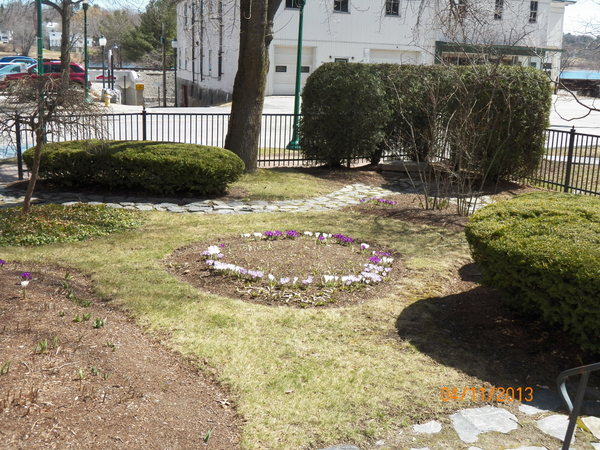