Gardiner Public Library is currently CLOSED due to the COVID-19 virus. As of Monday March 23rd, we have removed our drop boxes. No fines will accrue, please hold library items until we re-open.

Several months ago the Children’s Room started a
1stSaturday of each month story hour.
Time 10 AM to 10:30AM
New books are introduced with an old favorite added in now & then.
Come join us June 2nd for our next Saturday story hour. 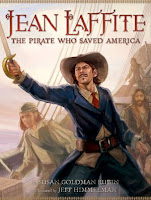 The American Library Conference has been held in New Orleans several times in the past so when I read a review for a book about Jean Lafitte, the hero of New Orleans I was curious.
Jean was raised by his Jewish grandmother after his mother died and from her he learned how their family suffered for practicing their faith at the hands of the Spanish government.
He vowed to become a pirate and capture all vessels flying the flag of Spain.  Although a biography for younger children,  Jean Lafitte: the Pirate Who Saved America by Susan G. Rubin, packs a great deal of history in its 47 pages.  I learned fascinating facts about the War of 1812 and the pirates who saved New Orleans.  Hopefully ALA will be held there again!
Book jacket illustration was found a Google images.