Fall is in the air and apple crisp should be in your oven on its way to the table.  Want a simple recipe from the best Maine cook book?  Here is the Marjorie Standish recipe from Cooking Down East.

Use pastry blender for mixing flour, sugar and butter.

Did you know that a Gardiner kitchen was once every Maine kitchen?  From Biddeford to Boothbay, Waterville to Washington County, I’ve never known a Maine home that didn’t contain one or both (or multiple copies of each) of Marjorie Standish’s classic cookbooks, Cooking Down East and Keep Cooking – The Maine Way.

It may be old news to many, but it came as quite a wonderful surprise to me (and to many of those with whom I’ve recently shared my enlightenment) that Marjorie Standish lived, cooked, and wrote most of her famous cooking columns and recipes right here in Gardiner!


As this past week brought us what would have been her 108th birthday, what better time to celebrate and get to know a little more about our celebrated citizen?

So, a little history….
Marjorie Holbrook was born in Brunswick on June 21, 1908.  She graduated from Farmington Normal School (later UMF) in 1931with a B.S. in Home Economics.  She taught the subject in various Maine high schools and eventually became home service advisor and coordinator for Central Maine Power Company.  In 1936, she married George A. Standish and moved to Gardiner where his family had lived and worked for two decades.

She and George soon set up their household on Chestnut Street where they remained for nearly 30 years.  Marjorie continued working for many years, including those when her husband served in WWII.  She began writing her popular cooking column, Cooking Down East, for the Portland Sunday Telegram in 1948. 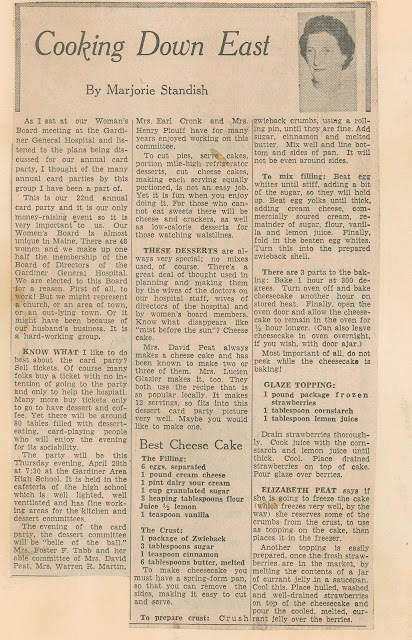 Marjorie was an active member of the Gardiner community and served many years with the Gardiner General Hospital Women’s Board — work she continued even after she and George moved to Augusta in 1966. 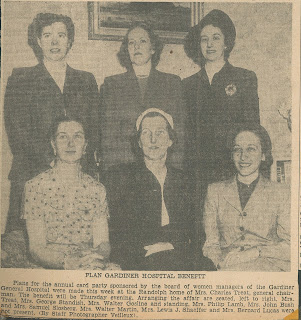 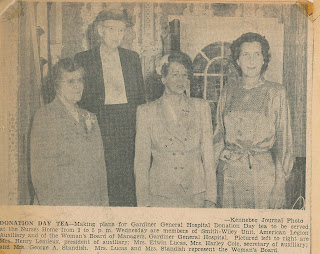 She wrote her newspaper column for 25 years, 18 years of which were penned in Gardiner.  In 1969, she published her first volume of 350 compiled recipes, Cooking Down East, and followed it only four years later with Keep Cooking the Maine Way.  Both remain Maine kitchen staples and we are proud to keep autographed copies inscribed to the Gardiner Public Library in our archival collection.  This week you will find them, along with some additional Marjorie memorabilia, in our display case in the Hazzard Reading Room  — stop in and learn more about her, her recipes, and her ties with Gardiner. 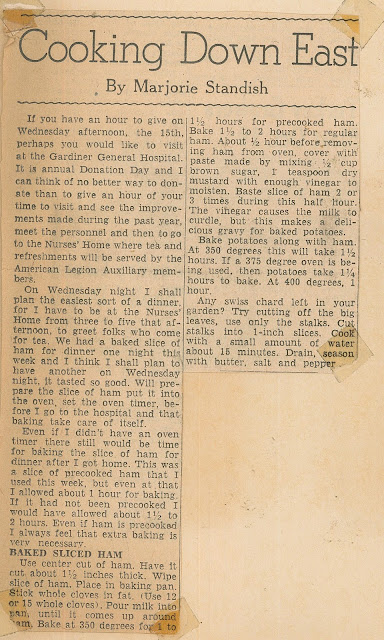 Also this week, the Gardiner Farmer’s Market will host a Marjorie Standish-inspired Pot-Luck on the Common (Wednesday, June 29, 5PM).  Bring your favorite Standish dish (if by some chance you do not own one of her cookbooks, the library also has circulating copies — and they are well worth checking out!) or bring any home-cooked specialty.   Marjorie was inspired by local ingredients and long-standing family recipes.  We hope you will join us and your neighbors in celebrating one of our own home-town greats, as well as our many home-grown foods!  Happy Summer!  Happy Cooking!! and Happy Birthday, Marjorie Standish!!!

Summer time is salad time . . . . and nothing beats the comfort foods of Maine like those featured in the cookbooks of Marjorie Standish.  Cooking Down East was published in 1969; Keep Cooking – The Maine Way was published in 1973.  Both books are available at the Gardiner Public Library.  Try the recipe that follows for macaroni salad or check out one of the titles to look for other down home comfort foods from Maine.

And all hail to Marjorie Standish and her down-home Maine recipes.  Marjorie was a local resident who was the longtime food columnist for the Maine Sunday Telegram.  Her two books of collected recipes – Cooking Down East and Keep Cooking – The Maine Way – are both available to borrow from the Gardiner Public Library.