Children’s Room for the month of February.

Ms. Jenn and the Nutrition Detectives will visit twice this month  ~

We will have a story, songs and a craft at

Art @ the Library on

We will be making Valentines.

Babies Love Toddlers on Fridays at 10:00 am.

If you’d like the history of the holiday, there are several good books in our children’s room that do a good job of presenting the information. In addition, there are some crafty books for kids to make cute Valentine crafts. You’ll also find a nice assortment of fun Valentine fiction books. For your perusal, the following is just a smattering of what we have to offer. 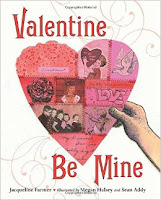 Valentine Be Mine by Jacqueline Farmer
Presents the history of Valentine’s Day, as well as its past and present traditions; Juvenile Nonfiction 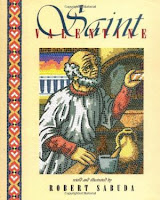 Saint Valentine retold and illustrated by Robert Sabuda
Recounts an incident in the life of St. Valentine, a physician who treated a small child for blindness. 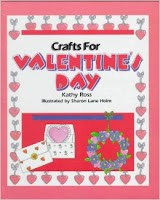 Crafts for Valentine’s Day by Kathy Ross
Valentine crafts for kids, as well as Valentine decorations 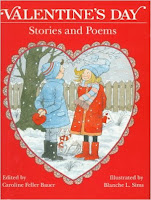 Valentine’s Day: Stories and Poems
A collection of Valentine stories, poems, and activities, by a variety of authors.
“More than two thousand years ago, a holiday similar to Valentine’s Day was celebrated in Rome. But in those times the Romans did not call it Valentine’s Day.  They called the holiday Lupercalia.  Lupercalia means ‘feasts of Lupercus’”.
“Celebrations of Valentine’s Day spread to other countries.  During the Middle Ages, people in England believed that birds returned from the south to choose their mates around February 14.  So Valentine’s Day seemed like a perfect time to choose a sweetheart.”
“In Italy, young men and women gathered together in flower gardens on Valentine’s Day to listen to music and poetry.  In France, fancy dress balls were popular.  Young Frenchmen were often expected to present their Valentine’s Day dance partners with bouquets of flowers.”
“The very first valentine was written at this time, about four hundred years ago, by a French nobleman named the Duke of Orleans.  He was taken captive during a war and imprisoned in a tower in England.  He missed his wife very much, and wrote her many love letters.  Many of the letters mentioned St. Valentine.”
“As more and more people learned how to read and write, they decided to send this kind of letter to their sweethearts.”
“Valentine’s Day was particularly popular in England while Queen Victoria ruled the land.”
All of these facts are quoted from “Valentine’s Day” by Clyde Robert Bulla, illustrated by Susan Estelle Kwas.  This book is available in the children’s room at the Gardiner Public Library.
Charlene Wagner, Children’s Librarian