I was honored this year to be Mrs. Claus for the city of Gardiner in their Christmas Parade.  I was not sure what I was in for.  The fun began with co-workers and friends offering ideas for my costume.  Being a thrifty person, I looked for things that I had on hand to wear.  Thank goodness, I knew someone who works with theater students and had a perfect wig, apron and white gloves.  Oh, the endless blessing of friends.

Well I had my costume set until the day came and I started to try things on. I came out of the bedroom with a black skirt on and my hair pulled back.  My grandson looked at me and said “You look just like Mrs. Claus.”  I knew then that what I would wear would work.  Dressing in the truck before the parade was a challenge, but again how often do you do that.  Then it was sit and wait. 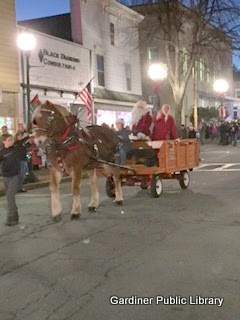 I checked in at the table for the parade.  Next I stood and waited to be told when the horse-drawn sleigh was ready.  There was a sleigh with tons of lights on a flatbed trailer that I was convinced would be our sleigh.  Later I realized that was not my ride because I had been told it would be a horse-drawn sleigh and there was no horse on that sleigh.  I looked further to the back of the parade and spotted a white horse trailer.  I realized that was where I should be, so I walked to the back of the parade to meet Santa.  Santa and the horse-drawn sleigh stopped to pick up Mrs. Claus.  Needless to say I was a bit nervous having never done this before.  Thank goodness Santa knew just what to do, waving and saying “Merry Christmas”.  I soon learned the ropes. 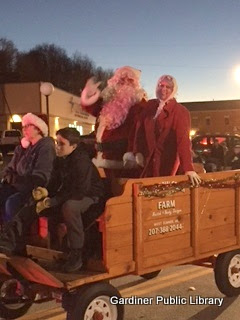 Riding a moving sleigh was a bit of a challenge that I also, got used to.  The crowds were small at first and then we came to the first set of lights for Water Street and the mass of people was unbelievable (which I did not expect).  It was nice to see so many people show up to see the parade and support the city of Gardiner.  It took your breath away and then you say “I will be okay, I can do this, just smile and say “Merry Christmas”.  The children’s and adult’s faces just light up when they see Santa.  It did not matter their belief or age.  Everyone was so excited.  Waving frantically at Santa, hoping to catch a wink of his eye.  It was just amazing to see this happen.  Seeing people I know brought tears to my eyes and I got very emotional at first.  I had fun blowing kisses to my dear friends and one time a friend still did not realize who I was until a family member told her who Mrs. Claus was.  The parade came to an end and I had had a blast. 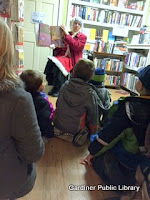 Now it was on to reading Christmas stories in Lisa’s Legit Burritos to the children (which is something I am very comfortable with) while Santa was visiting with children in Johnson Hall.  And of course Mrs. Claus uses her local library to pick out her stories that she reads to the good little girls and boys.
One of the best comments I got after doing this event was from one of our regular storytime attendees: “Miss Ginni, how do you know Santa?”
I could not have done this event without the support of family, friends and co-workers so I say “Thank you for this opportunity to the whole city of Gardiner”.  The feeling was something I will never forget.  It makes you realize just how special the season of giving is.
Ginni Nichols a.k.a. Mrs. Claus, YA Librarian