Destination Unknown: An Evacuee’s Story is the story of a young girl just coming of age when war breaks out.  The Second World War was declared on the day Patricia Phillips turned seven years old. A year later she and her older brother John became “evacuees” when their parents made a life or death choice to send them to live with strangers in order to escape the Nazi bombs. Like millions of other British children, the government’s wartime evacuation scheme helped ensure Pat’s safety, but left deep emotional scars. It took an unlikely friendship with an American writer a generation her junior for Pat to bring back the traumatic memories and heal the wounds of a life forever changed by war. This inspiring memoir is a testament to the resilience of the human spirit and the healing power of friendship.
Join Ms. Grant as she explains the process of writing this story and the inspiration behind this unique perspective of the bombing of England during World War II.  Copies of the book will be for sale and all proceeds from the event will be used towards the renovation of the library’s Community Archives Room.  Refreshments catered by students of the Capital Area Technical Center Culinary Arts program lead by Chef Charles Izzy.
Gay M. Grant owns and operates The Write Way consulting service, through which she has secured millions of dollars in grants for Maine non-profits, and helped clients tell their own stories. She is the author of Along the Kennebec: The Herman Bryant Collection (Arcadia Publishers) and her articles have appeared in local newspapers and historical publications. Inspired by her participation in the University of Southern Maine’s exchange program with King Alfred’s College in England in 1979, she has travelled frequently to that country to visit friends and to research this book. Grant is serving her first term in the Maine House of Representatives and lives with her husband Ron in South Gardiner, Maine.
The Gardiner Public Library is located at 152 Water Street, Gardiner.  This event is free and opened to the public and for more information call 207-582-3312. 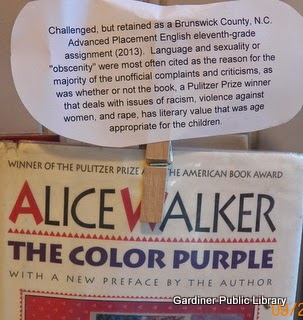 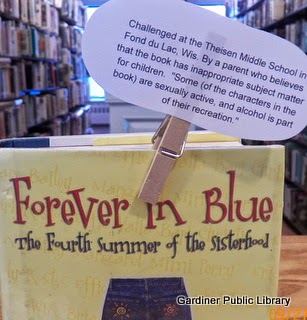 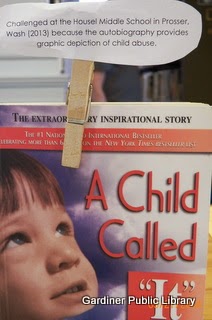 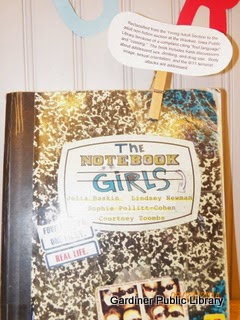 In 1983 I started reading a series of books which became known as a group from the title of the first book, “Tales of the City”.  The series follows a disparate group who rent rooms from the mysterious, yet motherly, Anna Madrigal, at 28 Barbary Lane in San Francisco.  The first book was published in 1978; the last book was just published this year.  There have been a lot of social changes in America since 1978, and the lives of these characters reflect those changes throughout the decades.  As I was reading this series, there were only 6 novels in the series.  The author, Armistead Maupin, eventually wrote 3 more to complete the cycle but there was an 18 year gap between novel #6 and the subsequent three.  I enjoyed this series and the characters so much that when I finished novel #5 and knew (at the time) that novel #6 was the end that I didn’t read it. I didn’t want it to end. I did not want to leave the characters.  By not finishing the series I thought I would always have that one final book to look forward; I would have in the future my one final adventure with these characters.  And so for 18 years, the book Sure of You sat on the library’s shelf – unread by me, yet there when I felt I could put closure to my fascination with these characters.

In 2007 Maupin published a new novel in the series – Michael Tolliver Lives.  Imagine my relief and excitement; I could finally go and read novel #6, Sure of You, since I would not be saying goodbye to the series after finishing it anymore.  Michael Tolliver Lives was soon followed by Mary Ann in Autumn and now The Days of Anna Madrigal.  After having read this last novel, I know the series is probably 99.99% done.  It ended well.  But I shall still miss them all and their adventures in San Francisco as they went from their youth and innocence onto middle age and beyond, changing and growing just as the country did in that span of 36 years.
Amazon.com’s blurb for the first novel says: “For almost four decades Armistead Maupin’s Tales of the City has blazed its own trail through popular culture—from a groundbreaking newspaper serial to a classic novel, to a television event that entranced millions around the world.  The first of nine novels about the denizens of the mythic apartment house at 28 Barbary Lane, Tales is both a sparkling comedy of manners and an indelible portrait of an era that changed forever the way we live.”  I agree totally.
Scott Handville, Assistant Library Director
“Uncertain Glory” is the newest YA book by Maine author Lea Wait. This novel takes place in Wiscasset in the months prior to the Civil War.  An extensive bibliography accounts for the thorough research Ms. Wait conducted on this period.  Racial tension between the black and white citizens, & a certainty that a war with the South would be won within a few months add to an interesting story.  The plot is further enhanced by the entrepreneurship of a young newspaper editor and the community’s belief in a young visiting spiritualist.
An interesting historical novel set close to home.
Charlene Wagner, Children’s Librarian
What am I reading?  Always an interesting question . . .
Currently I am listening to the fifth installment of Louise Penny’s Chief Inspector Armand Gamache series.  These books generally take place in the small town of Three Pines, outside of Montreal Canada.  I know, I know, how can so many murders take place in one small town?!?!  I guess if Jessica Fletcher can do it in Cabot Cove, Maine, why not in a small Canadian town?  The stories are well written, but I think the narrator – Ralph Cosham – adds significantly to my listening enjoyment.
I just finished tentative exploration of H. P. Lovecraft.  I borrowed 2 graphic novels, and a book of short stories.  In particular, I was looking to compare the same short story in different formats.  I read the book first (no pictures), than read the graphic novel (comic book style).  The story was the same, of course, but the artists depiction of the “monster” in The Dunwich Horror, was not mine.  Lovecraft’s description is ambiguous enough, that what the reader envisions is personal to him or her.
Next up on my list is a romance.  I’m not sure which one, though.  I have four in my “to be read” pile.  RWA (Romance Writers of America) announced their 2014 winners, so I have borrowed several from other libraries.  I’m looking forward to finding a new author, or two.
Ann Russell, Technology Librarian
Travel Back in Time at the Gardiner Public Library’s
Historic Gardiner Scavenger Hunt!
Throwback Thursday, July 10th, from 4-5 pm
Students in Middle School and up come learn and see what Gardiner look liked in the 1800’s compared to today.
Have fun learning & winning prizes! Snacks provided
Hope to see you there!
* * * * * * * * * * * 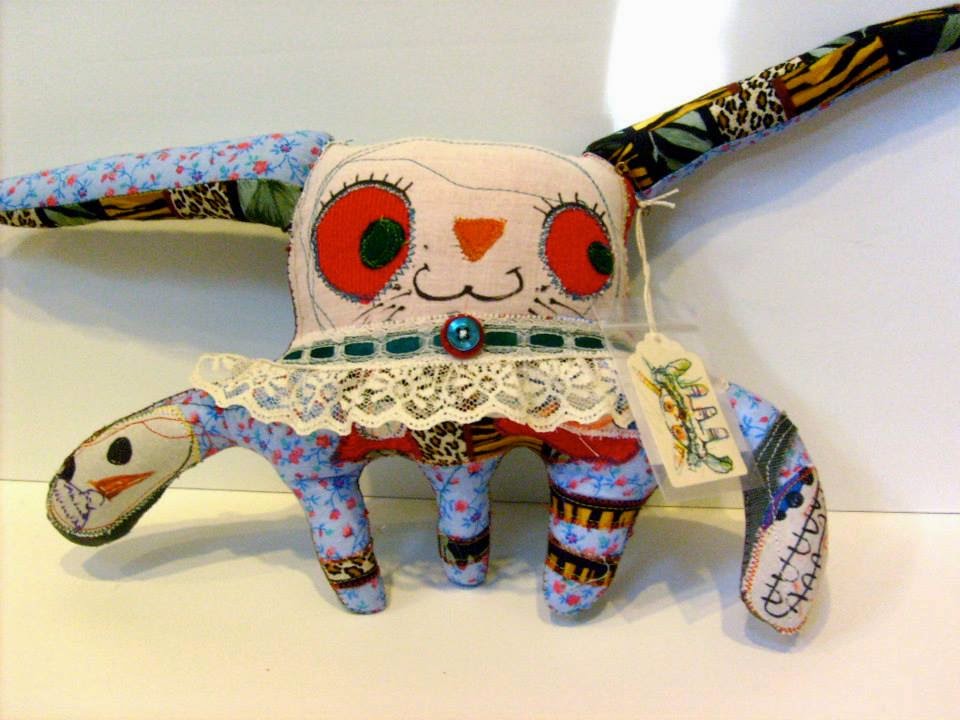 “Soft monsters” for teens
On Wednesday, July 23rd from 10am-2pm, the staff of the Gardiner Public Library is calling all little Frankensteins!  In this creature-creation workshop young adults are invited to bring their imaginary monsters out into the world.  Friendly, scary, or strange, workshop-goers will begin by developing a character through drawings, paintings, and short stories.  They will then be guided through the process of turning their newly created personalities into sewn, stuffed monsters.  Students will learn basic sewing skills, as well as how to construct very simple patterns. Feel free to bring your own sewing notions!  This program will be facilitated by Adrienne Beacham.
Adrienne Beacham stitches together distinct media into strange creations. A fusion of painting, printmaking, drawing, collage, and fiber arts, her work often features monsters and other ridiculous personalities. She is currently working on obtaining her K-12 art ed. certification, and eventually hopes to pursue a career as an elementary art teacher. This event is free and opened to the public.  Space is limited, so pre-registration is mandatory.  Call 582-3312 for more information.  The library is located at 152 Water St, Gardiner. 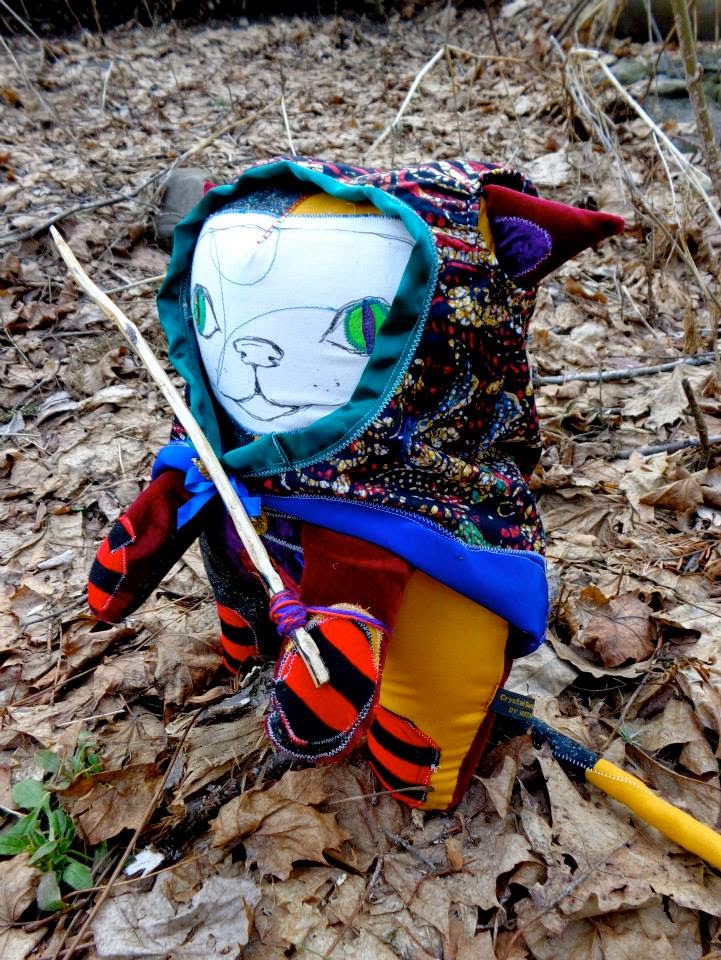 The Gardiner Public Library summer reading program for 2014 is off to a great start! 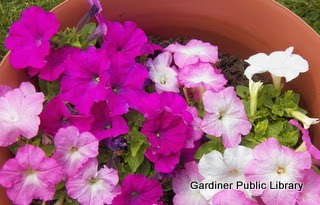 Summer is the perfect time for kids to read books just for fun.  No tests, book reports or pressure involved.

Our first story hour/craft day involved making markers to identify plants that were acquired to go into our library garden as well as the actual planting of flowers, herbs & vegetables. 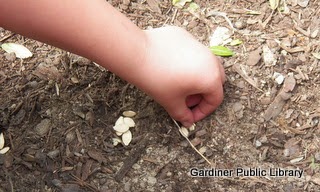 Unlike past years, the sun shone on our endeavor and the children worked hard to get everything planted. 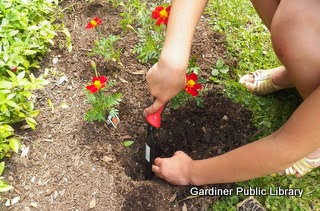 Check out our calendar for future events.
Everyone welcome!

All are welcome to come and browse and get some great deals on Saturday, June 21st (9:00am-4:00PM):   Most hardcover books – $1.00, children’s books – 50 cents and most paperbacks – 50 cents.  Videos and audio books will be priced as marked.  This book sale is part of Gardiner’s River Festival and there are activities all day long!

Monday, June 23rd (10:30am-5:00pm) is sale day…buy a bag of books for a buck (a bag may hold up to 20 items).
The book sale will be held in our Hazzard Reading Room on the main floor.
The Gardiner Public Library is located at 152 Water Street, Gardiner, Maine.  Come support the library and get some great books!  Some of the proceeds will be used towards the renovation of our Community Archives Room.  Please call (207)582-3312 for more information.

For a change, I thought I would showcase some postcards that are in the Archives Room. 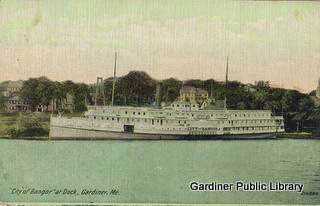 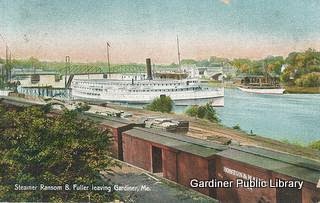 These postcards, from around 1906, show some of the ships that went up and down the Kennebec River with supplies and people. 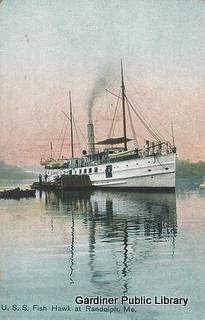 If you have old postcards of the Gardiner area that you are willing to donate, the Gardiner Public Library would love to have them.  These postcards are just one of the things that the Archives Room at the library has to show our customers. 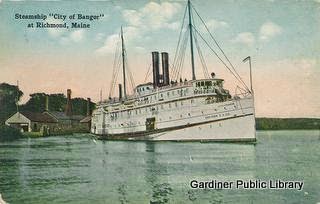 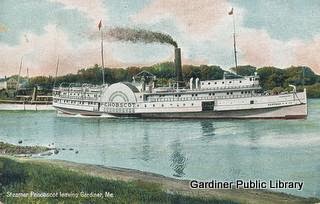 Mr. Dewey likes books kept in an orderly fashion!
Sign up to be a weekly or bi-weekly volunteer “shelf reader” in the Children’s Room.
Parents and kids welcome – We’ll assign you a section to claim as your very own responsibility.
Time – June to August
Training – Free
Time commitment – 1 hour or less per week
Reward – Personal satisfaction in fulfilling a commitment and maybe stumbling on a book to read that will become a “favorite”
Call 582-6894 for more information.
Charlene Wagner, Children’s Librarian